In early 1952 Ricart established contact with Saoutchik to present a sketch of body on the basis of Z-102. The Belarusian, who by then was in decay stage, drew the lines of a cabriolet. Weeks later, two chassis were sent to its french facilities to be dressed. After these two units, and under the agreement between the two companies acquired, by Saoutchik also it became the exclusive distributor in France of Pegaso bodied by him, another twelve cars in different series out of gallic workshops from 1952 to 1954. After the final collapse of Saoutchik in 1954, Serra from Barcelona in Spain assemble finished four that were left unfinished vehicles in France, so in total there were eighteen Pegaso signed with the legend "Carrosé par Saoutchik".

The first unit Berlinetta Saoutchik called prototype differs from later units in the front grille bears the horizontal slats instead of the two crossbars that are characteristics of the Pegaso. In October 1952 it was exhibited at the London Motor Show in February 1953 and in the New York Motor Show where it becomes the first sports Pegaso sold. Later the ceiling is painted white and so is currently held awaiting restoration. It has participated in the Amelia Island Concours d'Elegance (Florida) in 2016. 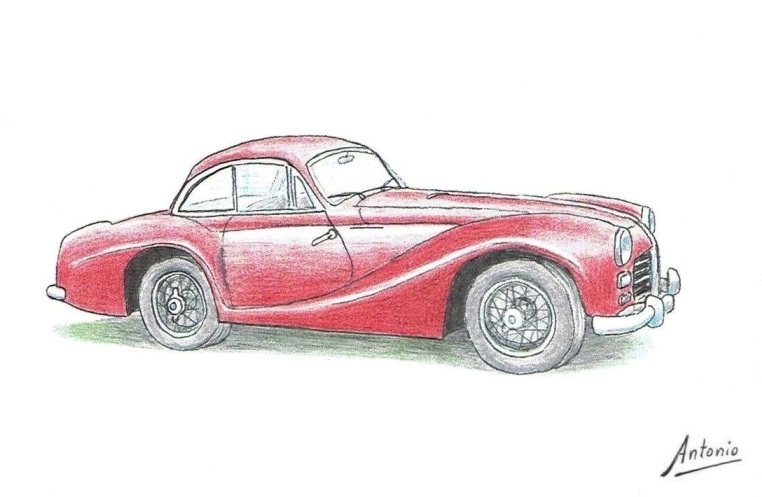 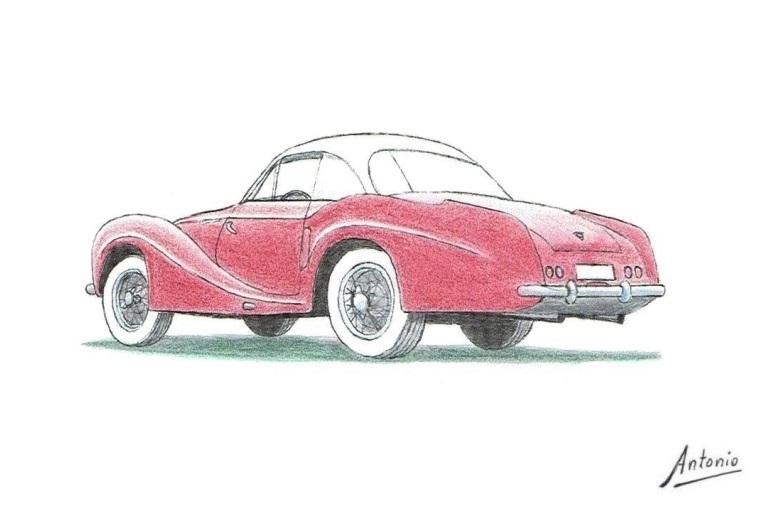 Three units of this model were built after the prototype berlinetta. One was exhibited at the Paris Salon of 1953, another in the Hall of New York the same year and the third copy was acquired by Baron von Thyssen, it was upholstered in leopard skin and some elements were plated in gold. It was exhibited at the Geneva Motor Show 1953 and it won several concours d`elegance. 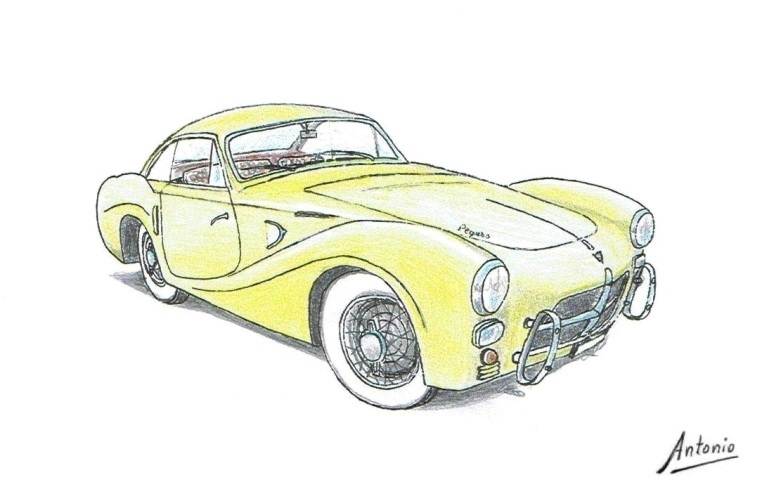 In October 1953, a year after having presented its prototype cabriolet on chassis Pegaso Z-102 at the Paris Motor Show, Saoutchik came back to this event with the final version (which we call CS1) from which built two units. Curiously half forward body (where are born tail fins) is steel, and half back, aluminum, including doors and hoods. Its lines are somewhat pompous and recharged, typical of that stage of the coachbuilder. 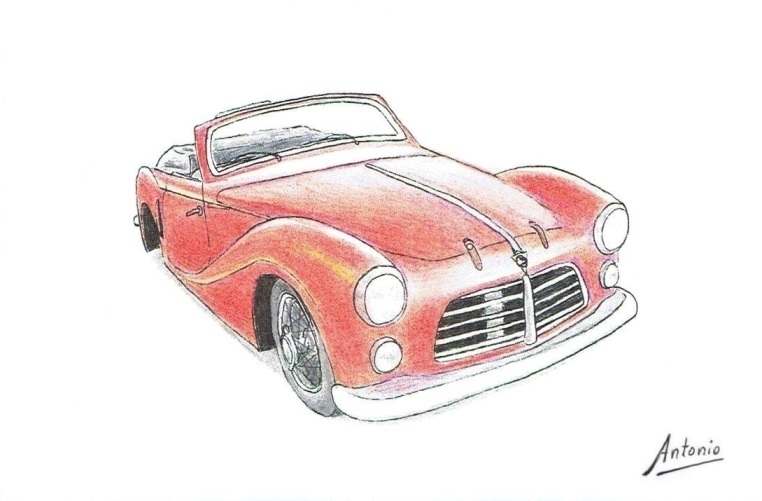 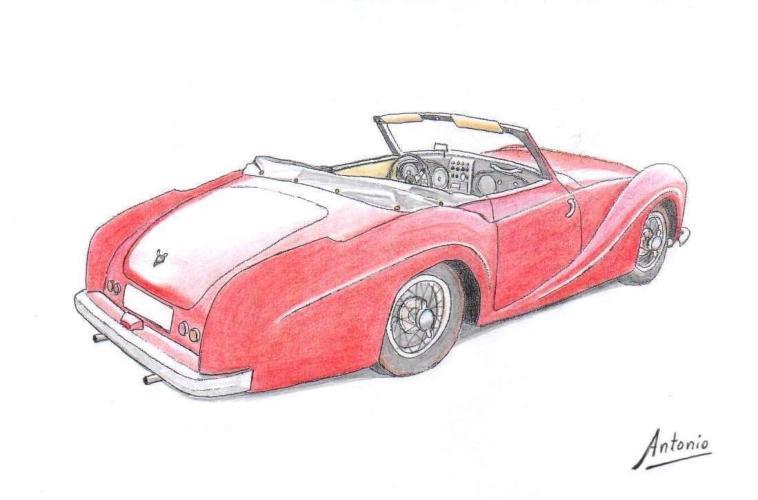 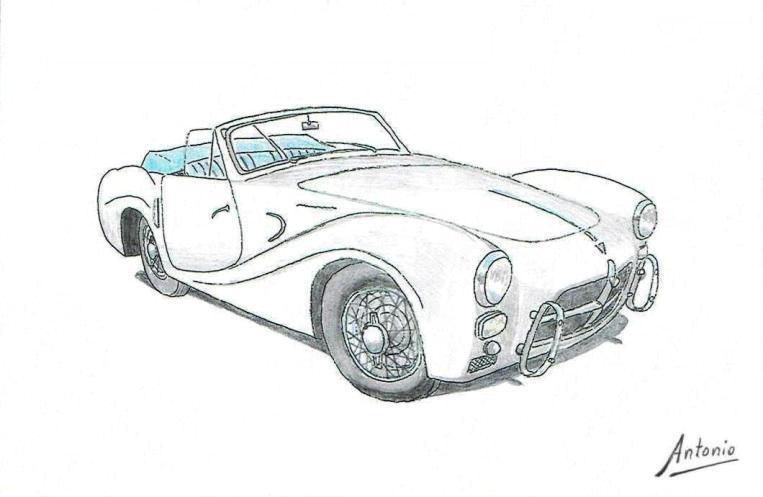 The three units that make up this series represent the transition between the previous BS1 and subsequent BS2. The opening of the doors becomes in opposite direction to the march (safer). One of the units is identical to the front BS1 series (and therefore equal to the CS1), while the others have the same front is coming on -the BS2- with visor surround the main and auxiliary headlights is extension of the front fender. Only are conserved the two units with front equal to BS1, one of them painted in blue (the colour wich went out from the factory), although it was painted in green for several years. 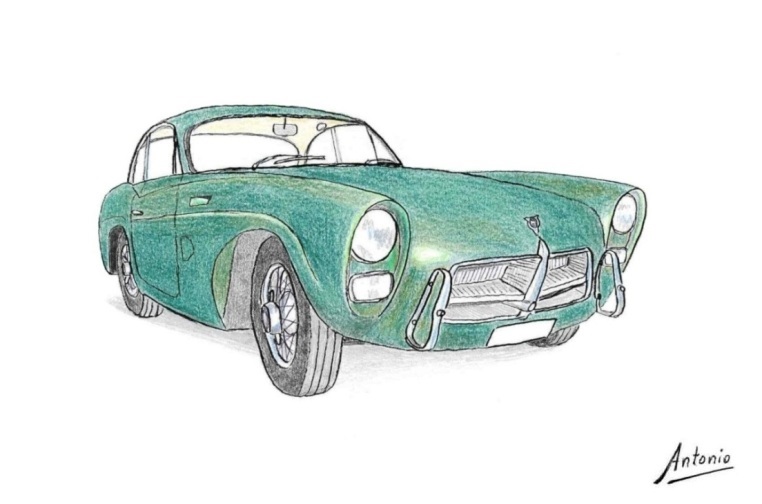 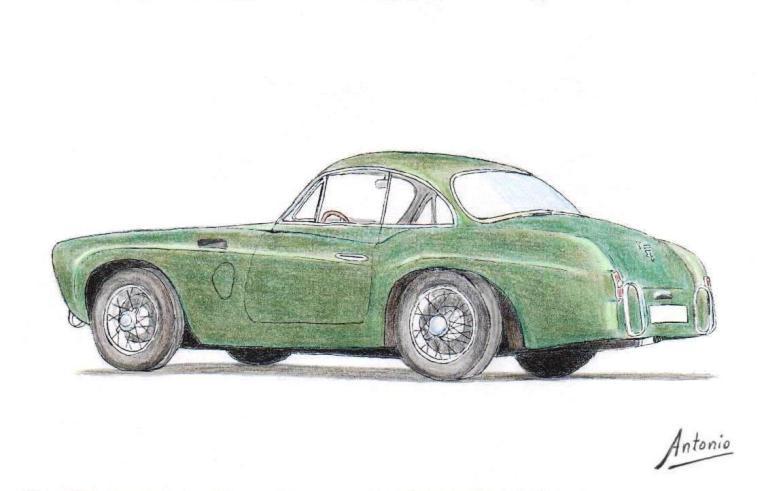 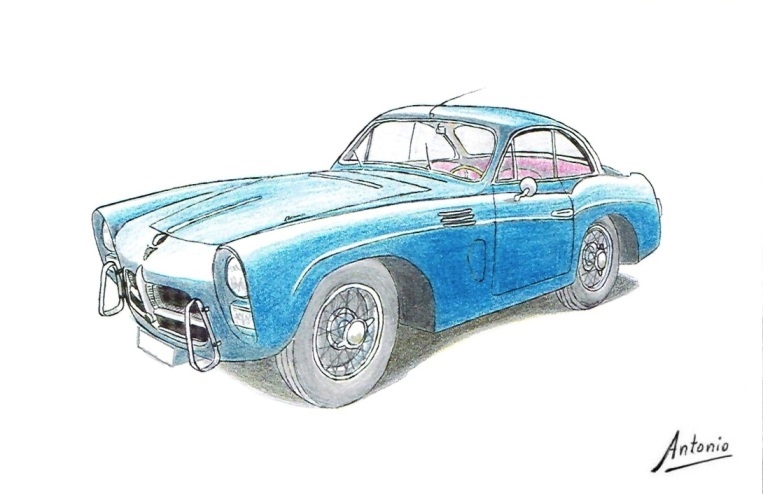 This model was presented publicly in a concours d'elegance held in the Italian city of San Remo, then exhibiting a light blue tone. In the aesthetic appearance shows the traits that characterize the series BS2 -2nd Saoutchik Berlinetta -, revealed in October that year in the Paris Motor Show: very balanced lines, smoother curvature of the fins and more open wheel provided compared to the previous Pegaso Saoutchik. The front is distinguished by an extension of the front fins shaped hood that frames the headlights -Serra will recover this detail in his last creations-, maintaining the typical landscape cross in the mouth of ventilation radiator. It highlights the peculiar windshield ending, that the absence of the top frame stylizes remarkably the line and gives a much lower aspect.

After his presentation had several owners, one of which was proposed to solve the problems of chassis flex, that caused the opening of the doors up, commissioning in February 1958 its re-coached as a coupé hardtop, besides adding a prominent back fins.

Its current owner has restored returning to its original state as it is in the drawing. 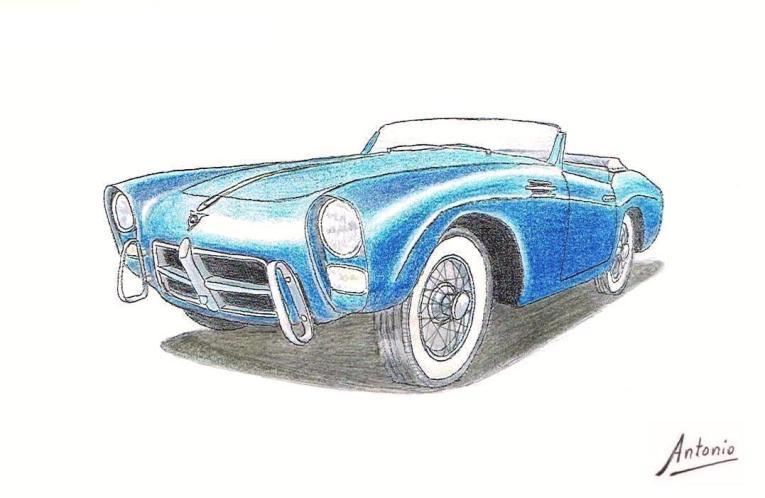 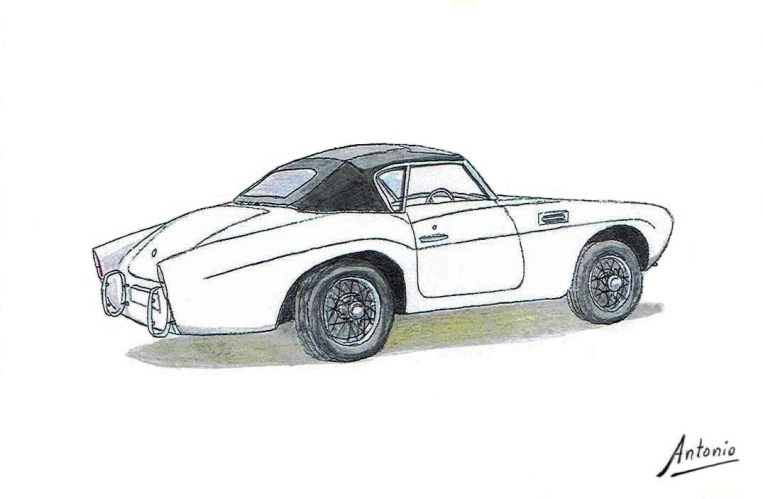 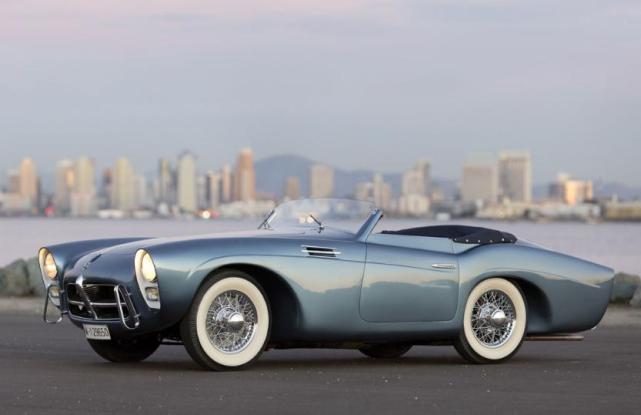 This model was in the rear where features other than those already introduced in the second body of the intermediate series (BS 1/2) were discovered. So you could see how the wings were prolonged for embedding small tail lights, like the distinctive design to accommodate the headlights. More smoothing the final route of the roof. A tube bumpers, front and rear, and the air intake on the hood were the most visible differences added to its renewed appearance. 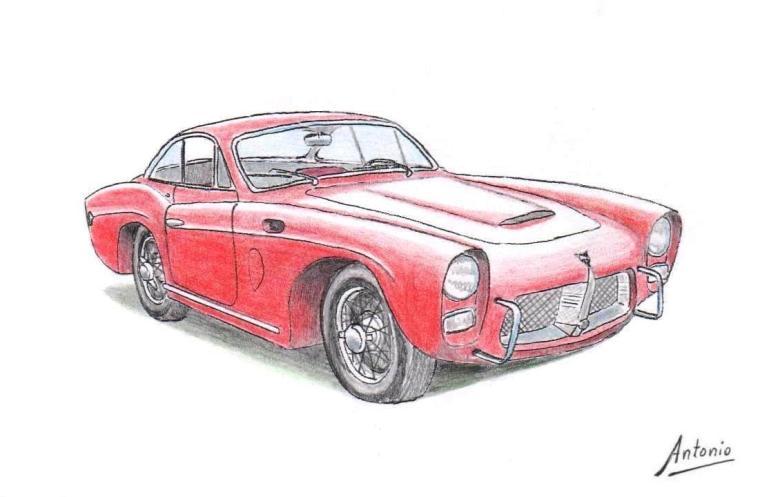 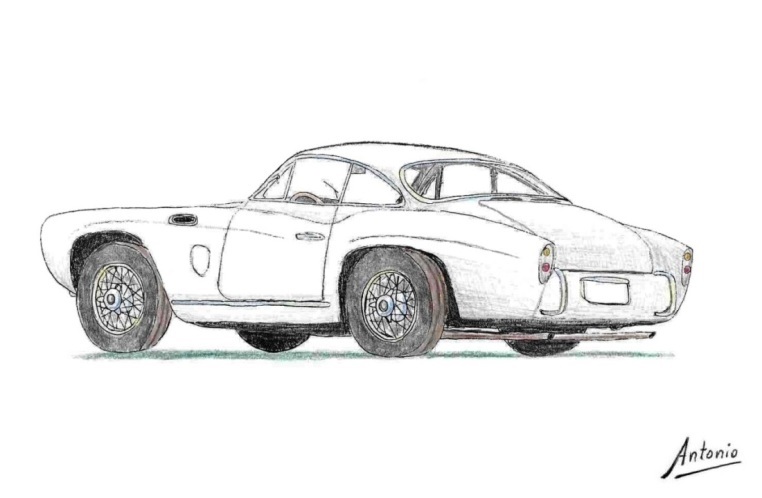 This model is a single one, it was presented at the International Paris Motor Show 1954, the Saoutchik's stand.

The front wore a bezel in a cross shape, which was later replaced by two fog lights and the black part of the body was painted in silver gray. This firm has always been characterized by their models loaded and Baroque lines. This particular blend of aesthetics between Saoutchik and Touring is because the Frech firm went bankrupt leaving unfinished body. After many laps, the Italian Touring company designed the front and the result was a singular Pegaso. A year later in Paris was presented the traditional Concours d'Elegance for cars, receiving first prize. Its first owner was the Duke of Osuna; in 1965 it was acquired by Felix Creus; in 2011 its new owner in charge car restoration by returning the front cross, eliminating the fog lights and bumper bulky, leaving black paint without the previous two-tone color red. 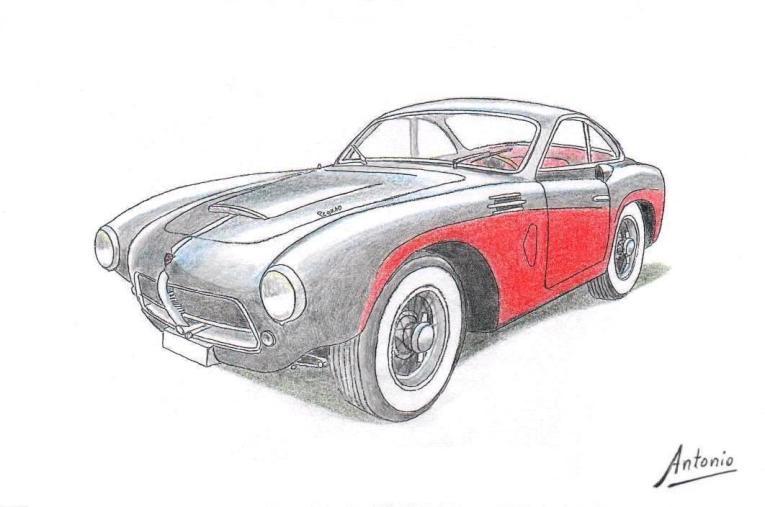 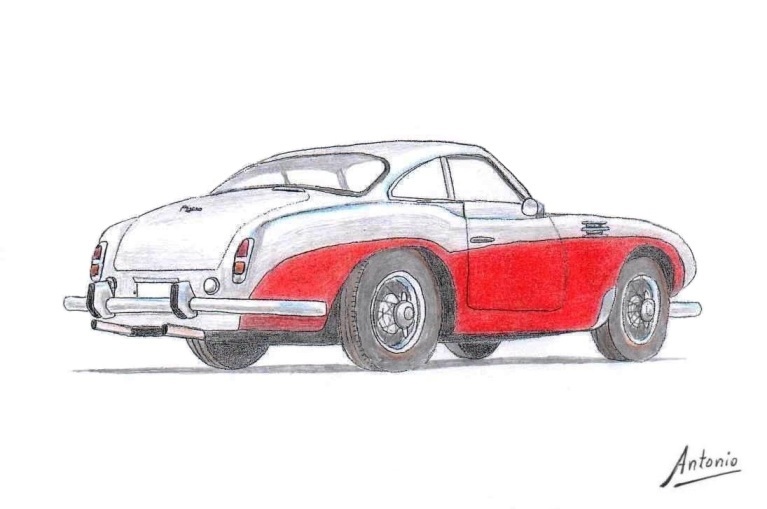