Of the eighty-four chassis manufactured by ENASA for the Pegaso Z-102 half (forty-two) were bodied by Touring in Italy.

Touring's first job for Pegaso was this model, from which only one unit was built. Anderloni, Carrozeria Touring chief, wanted its captured the flavor of Spain and therefore decided that the design was to focus on the Spanish bull, made in the bonnet two openings that resemble swollen nostrils of a bull, besides the upper edge of the windshield looked like the horns and nostrils are repeated in the tailgate. It was presented at the Paris Salon of 1952, and a year later traveled to the Hall of New York and stayed at Brewster Motors, importer of Pegaso in the United States. The windshield was repalced, after month of his presentation, by a steeply raked windshield with two curious deflectors on both sides since it did not have side windows. The bumpers do not exist, as in the rest of the Touring Pegaso. It has an elegant side with two doors without hands for opening.

The engine was built in light alloy, it weighs only 190 kg. It is a V-8 engine with a displacement of 2,814 cc. With a compression ratio of 8.1:1 this engine develops 172 hp at 6,000 rpm and has a top speed of 217 km/h. The weakest are drum brakes which require considerable effort from the driver.

Currently belongs to an Argentine collector. 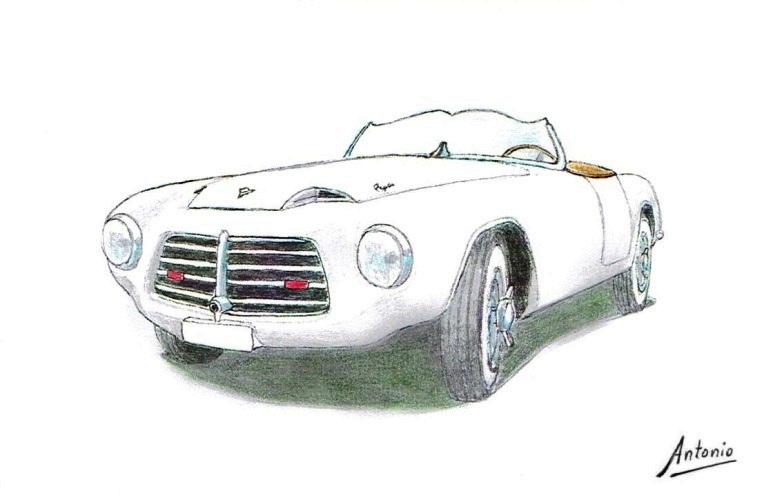 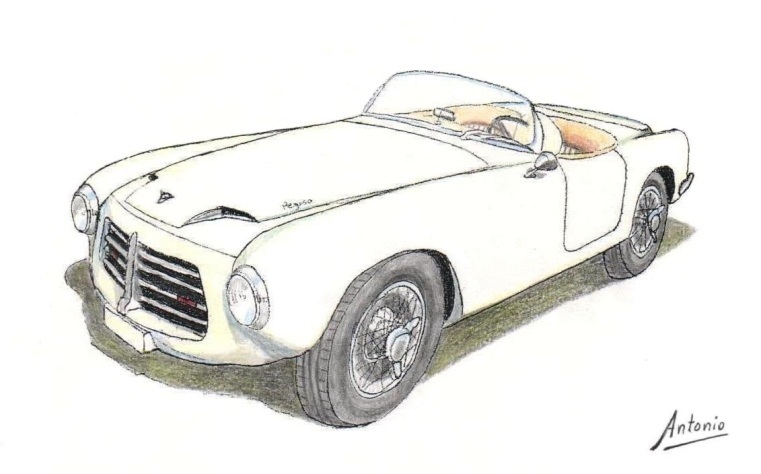 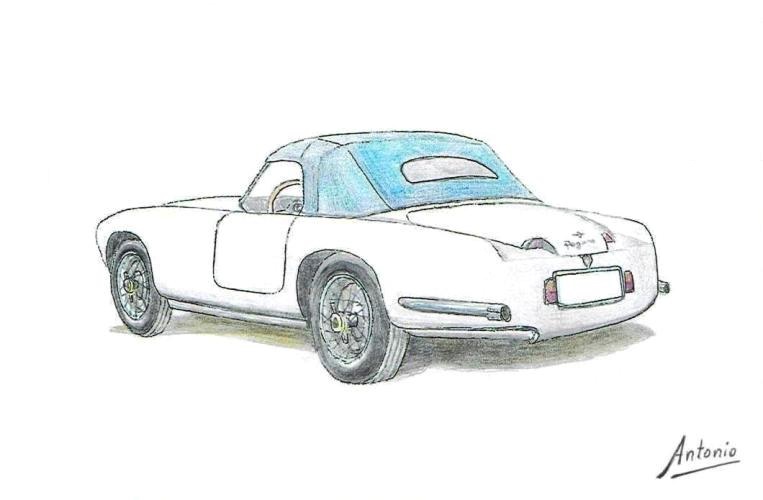 Touring gave Pegaso the lightness that sports should possess. The "Superleggera" model used by the Italian firm, consisting of a tubular subframe lined aluminum plates, allowed to build lighter bodies. Ricart, aware that Enasa designs overweight sinned, established a partnership in 1952 with Anderloni Bianchi, whom he met while Wilfredo was working at Alfa Romeo.

Touring had finished his first and stylized berlineta "prototype" (with Enasa style grille) in late 1952 and made his official presentation in the Hall of New York, 1953. Four years later it is given to Mohammad Reza Pahlevi, the last Shah of Iran, during his visit to Spain. After spending several years in the stables of the Royal Palace, it has two owners in Iran, the second of which is an American geologist who sent it to the Enasa factory in Barcelona in 1966 for a total review and repair, then painted red color. It was then taken by road to Italy, driven by Joaquín Palacio, suffered a serious traffic accident, and had to be taken back to Barcelona, to make an expensive body repair. Transferred finally to Italy, its owner puts it on sale in 1967, acquiring it there its new owner. This one took the vehicle by road to Great Britain, crossing Switzerland and Germany. He then went to USA, and in 1968 he returned to GB, imported the car there, acquiring then British registration, and used it assiduously until in 1976, due to problems in the engine is subjected to a great set-up. 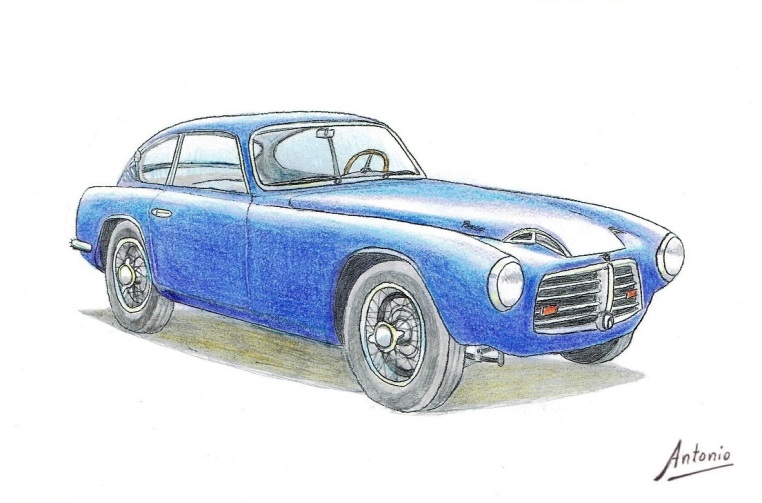 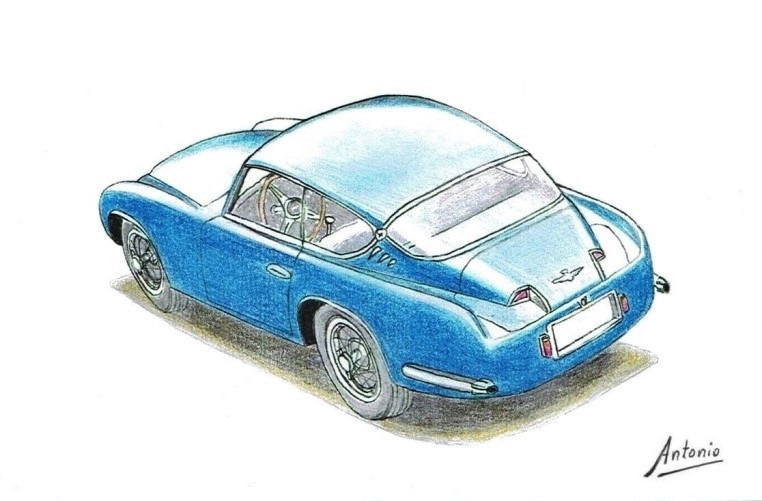 One of these vehicles belonged to the Count of Caralt, who used it in numerous competitions, ranking third in the Cup Monjuich 1954. One of the things most characteristic of the Pegasus is the gearshift. The speeds are the first and reverse to the right of travel of the lever, as we go marching go left until you reach the fifth is on our side. Its engine is capable of rotating at 7000 turns with a very flat torque curve. Failing brakes is insufficient to engine power and the very tough and direct address, which seemed transplanted from a truck. 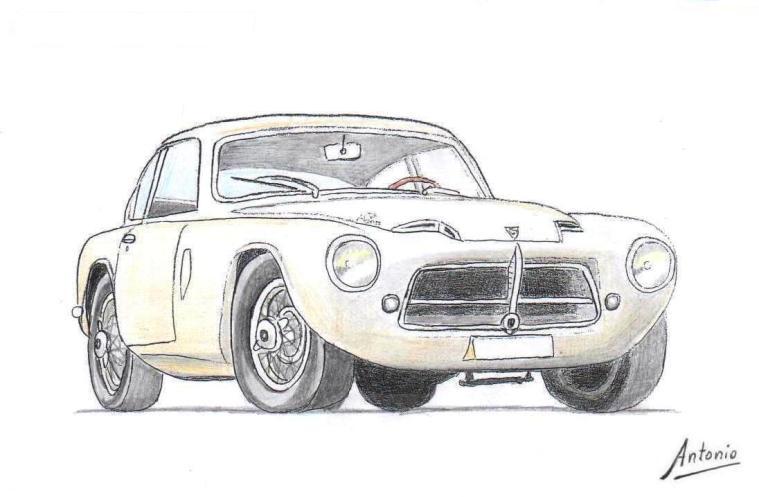 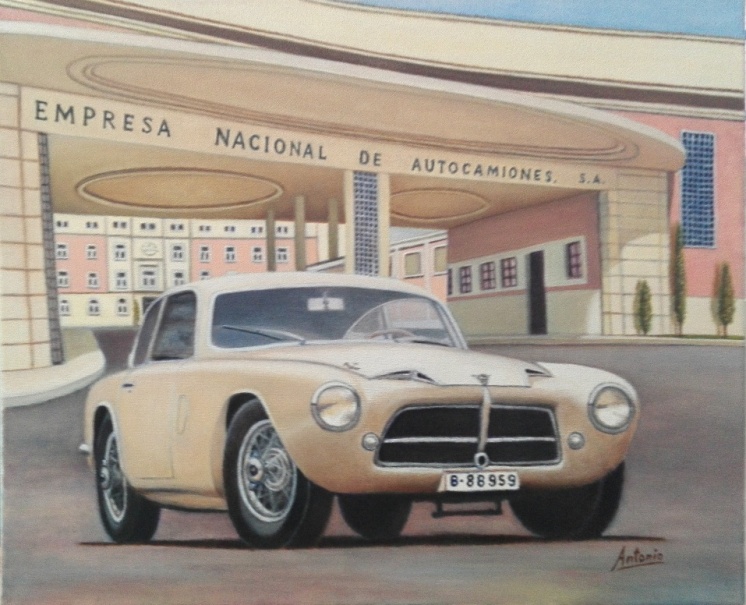 The car of the next image is acquired in January 1954 by Jorge Martí Llumŕ (Barcelona), who, at the time of purchase, entrust to Pedro Serra a bumpers and installs auxiliary headlights. 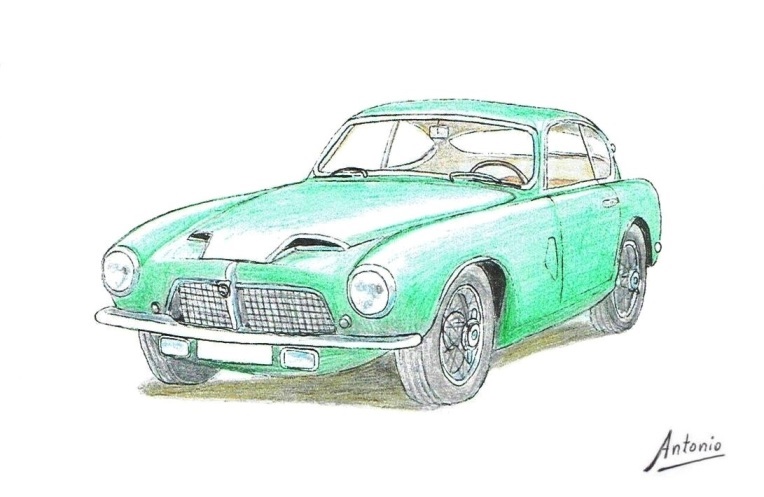 The following model was manufactured in white, participated in some sports events, and was returned to the Touring house, where a complete restoration was made, to be exhibited at the Paris Motor Show in 1954. Acquired in 1957 by the spanish actor Alberto Closas. It was brown, red and blue, colors that have been revealed during its restoration in FVC Classics, which has returned it to its original color. It is in perfect conditions and driving. Exhibited at Autoworld Brussels (Belgium) 2018. 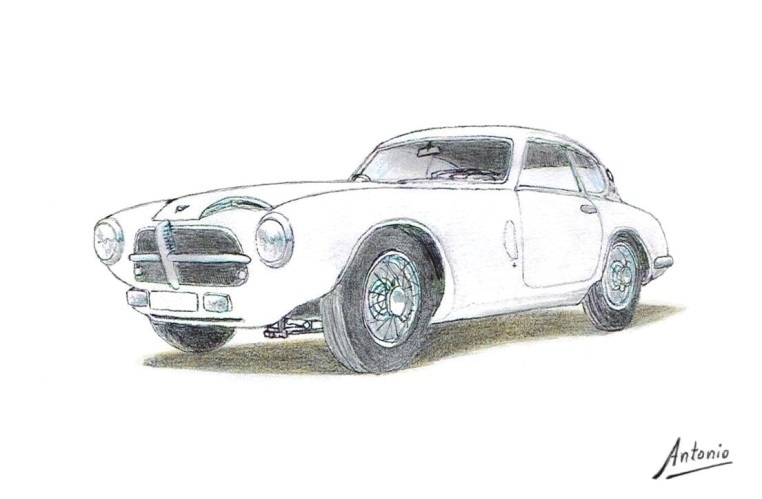 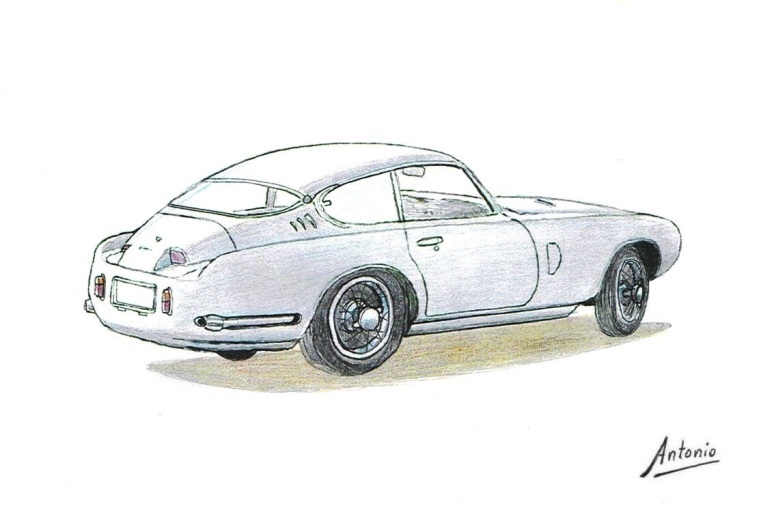 The vehicle drawn below was exhibited in the Turin Motor Show in 1954, has the particularity to be equipped with side blinkers embedded in the body. Its first owner, Francisco Godia, participated in several sprints and rallies with remarkable success, highlighting his victory in the race climb the Rabassada (Barcelona) in 1955. Exhaust pipes were modified, replacing the other side of origin below and putting in place of the original one bent pipes that served the function of rear bumper. Sold in early 1956 Julian Celaya, this involved with it in some tests national speed after suffering an accident in practice for the rand Prix of Porto (Portugal) in 1956 then sold to the US, it was subsequently purchased by its current owner in 1968 who has presented in 2016 at the Amelia Island Concours d'Elegance (Florida). 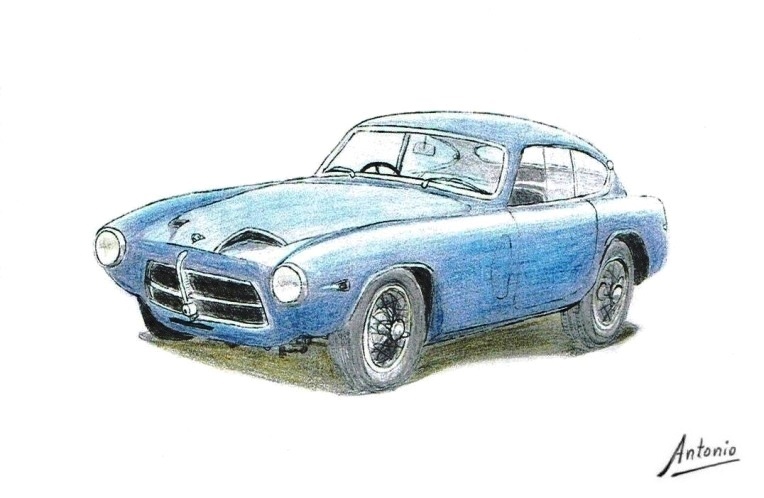 The Z-102 of the following drawing has the hood with nozzle to house the carburetors on the compressor, has the turn signals embedded in the fins and two round front fog lamps, embedded in the bodywork. Built in 1954, it is copper colored and tapestry brown, exposed that same year at the Turin Motor Show, it is sold at the end of the year to Rodolfo Bay, that participates in several tests throughout 1955: the slope of the Perdices, Galapagar, Montjuic ... In 1955 it is acquired by Antonio Farrás, with the largest motor of 3200 cc. without compressor, also participating in several tests: Galapagar, Barajas, return to Catalonia ... Acquired in the sixties by the brothers Hans and Fritz Schlumpf for his museum in Mulhouse, exposed there for many years, subsequently sent to the reserve funds of the museum until It starts a meticulous and long restoration, completed in 2017, which has returned it to its state of origin. The car is classified in France as "Monument Historique". Exhibited at Autoworld Brussels (Belgium) 2018. 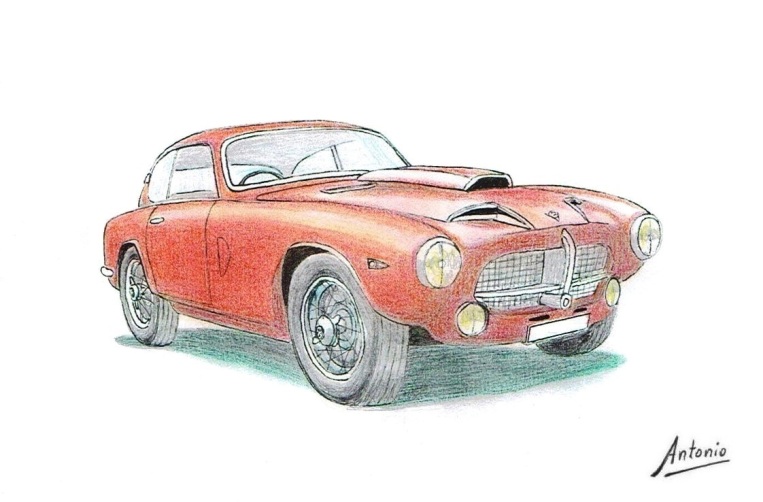 The model shown in the following drawings was manufactured in 1954 and acquired by Alex Soler Roig, who won in 1959 on the climb to Montserrat, which is the last absolute victory in a sports competition Pegaso. After passing through several owners, one of whom will become spider and replaced the engine for Alfa Romeo 2500 / 6C, in 1984 it acquired its current restoring it to its original body and participating, among other competitions in the Mille Miglia owner historical (Italy) for four years. It has participated at the Techno Classica in Essen (Germany) in 2012. 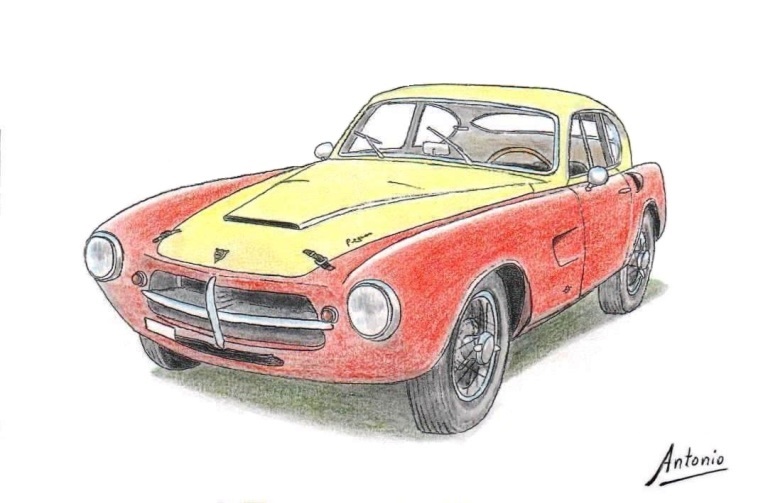 The car was officially presented in the best salons of automobiles of the time, Turin in April 1955 and Paris in October of the same year. The differences between the two generations of Touring, plus aesthetic represented a step forward in improving performance. The front was optimized with an opening under the grille to improve cooling the oil radiator. It was used to increase the space for the front license plate and couple it to the sides two rectangular headlights and turn signals while descending.

At the rear the changes consisted of placing the rear lights at the ends of the fins and in some units, move the exhaust exits beneath the body instead of making them emerge from within the bumper. 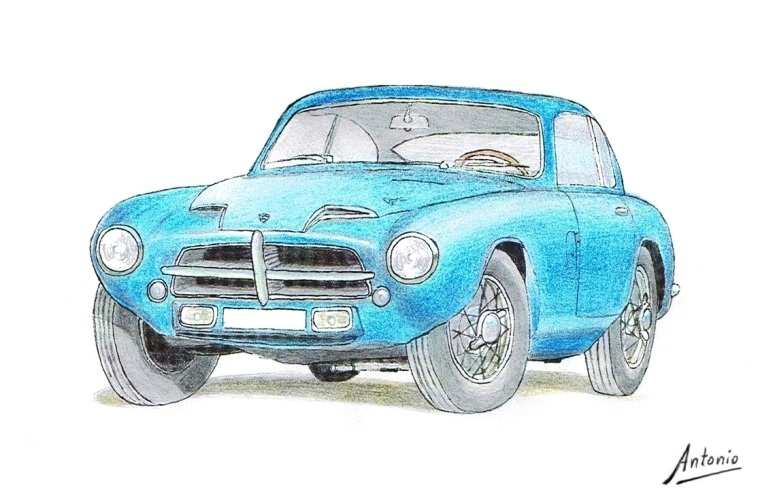 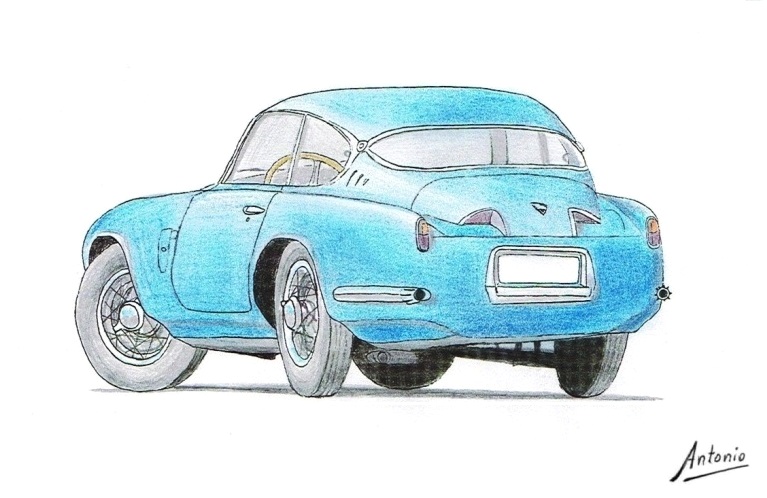 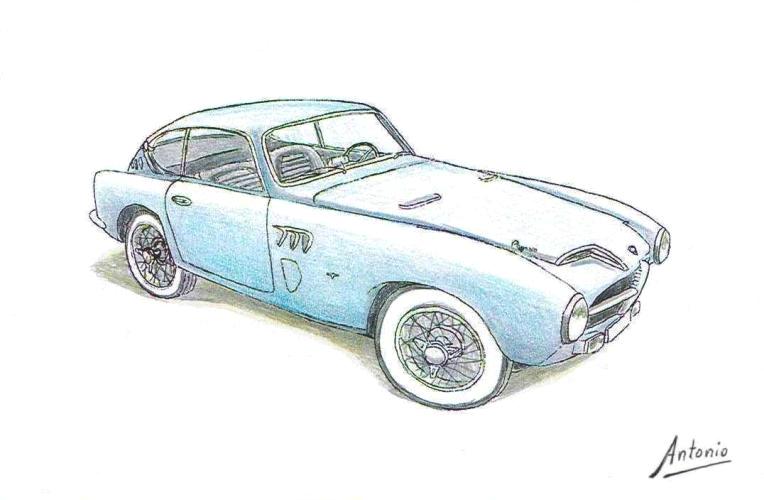 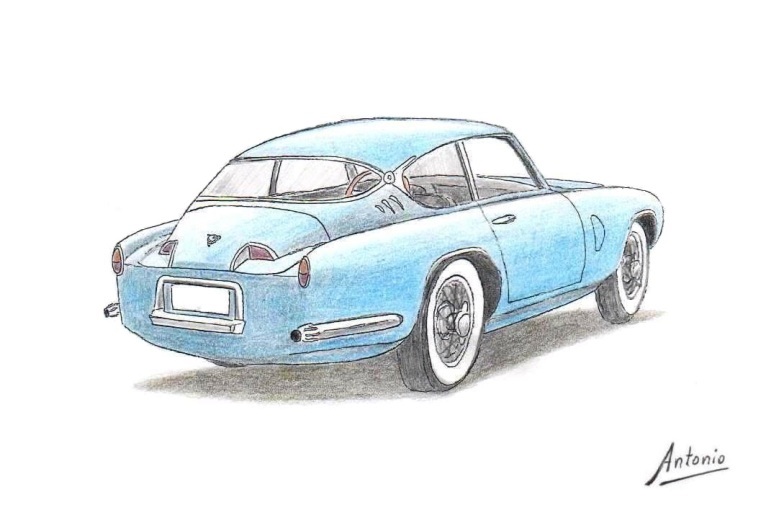 The last Z-102 Berlineta Touring was used by Menzel regularly, participating in numerous tests of regularity and speed, highlighting his victory in the rise Galapagar (Madrid) in 1956 and second place in the climb to the hill of Las Perdices (Madrid) in 1957. Another known fact is the journey made by Menzel between Madrid and Marbella in 1956 in 5 and a half hours with a stop for refueling; taking into account the state of the roads in Spain at that time, this was a feat. After two years of owning the car, sell it to ENASA Menzel. The body is disassembled and sent to Touring, which is restored and painted light blue. The interior becomes black. Mechanical suffers a facelift, keeping the engine competition. The new car is offered for sale. Purchased by Mas Sarda, who uses very little. It is sold to its third owner, the Spanish Duke Luis D'Antin, Porsche driver in the 50s. A Japanese collector, Minoru Kawamoto, buy it in 1976 and participates with him in the concentration of Pebble Beach in 1994. During his time Japanese car travels 500 km. In 2001 he was sold to Belgian collector Johan Van Puyvelde, Heiko Seekam in 2003 and he sold again to Francisco Martin in Essen 2007. It is in perfect conditions and driving. This vehicle is equipped with drum brakes wider "wings", introduced experimentally in 1955. 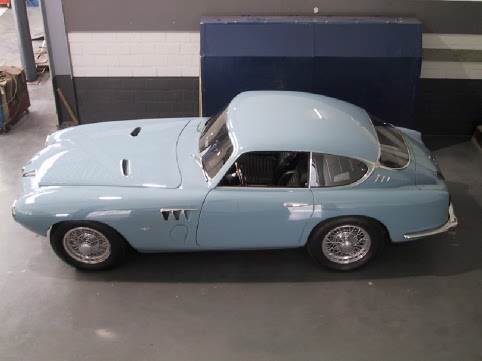 Known as "Grand Frisson" in the French nomenclature and in the more colloquial factory was called the "Ears" prominences overlapped by the roof and rear wings, it is one of the most beautiful and original Touring creations. It was shown at the 1953 Turin, only prototypes Alfa Romeo BAT, created by Bertone, were able to rival the Thrill in the kind of glamor that leaves gaping masses.

Equipped with the engine 2.8 liters and 170 hp, Anderloni Carlo Felice, the son of the late founder of Touring, created a design that blended his stylistic berlinetta ideas -the grid, the nostrils of the bull in the Capo-with theories aerodynamic force then and futuristic scent of American dream cars of the moment. Black lacquered with a broadband red flowing along its flanks and envelop the roof, ended up being unique. The bucket seats and wraparound straps white interior attracted attention, but more provocative were the two arcuate sections of the body located behind the rear uprights of the cabin. These fins have a double aerodynamics and structural function, to provide ongoing stability and rigidity to the frame. Security was already a topic of interest for incorporating home safety belts and fire extinguisher.of them a leading role.

Aptly named Thrill, was a single model, made the international circuit of engine rooms, earning each of them a leading role. Exhibited at Autoworld Brussels (Belgium) 2018. 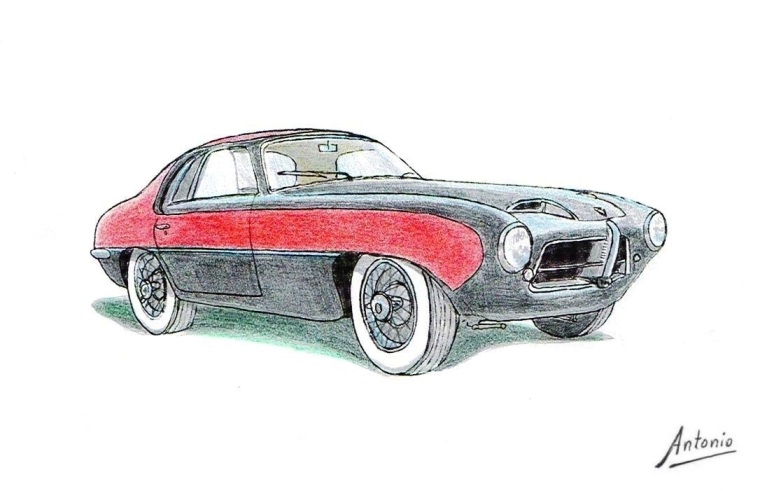 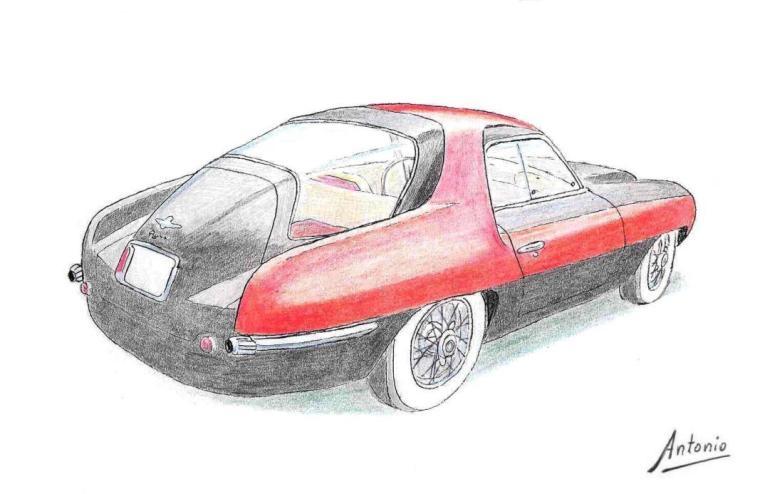 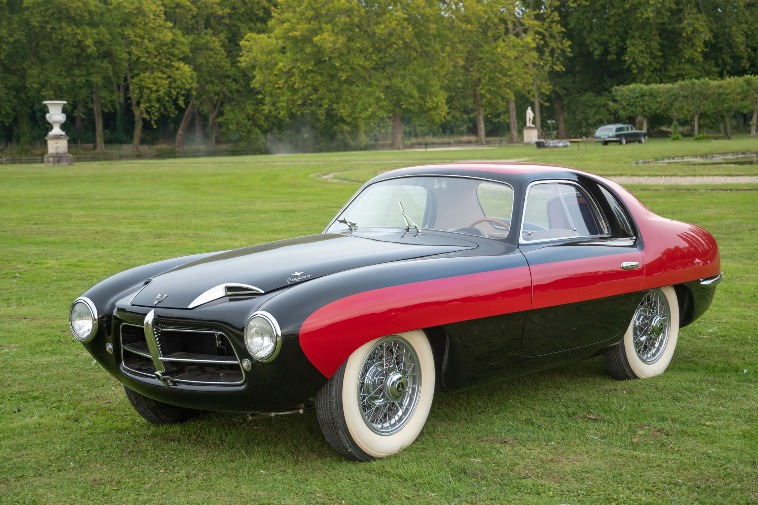 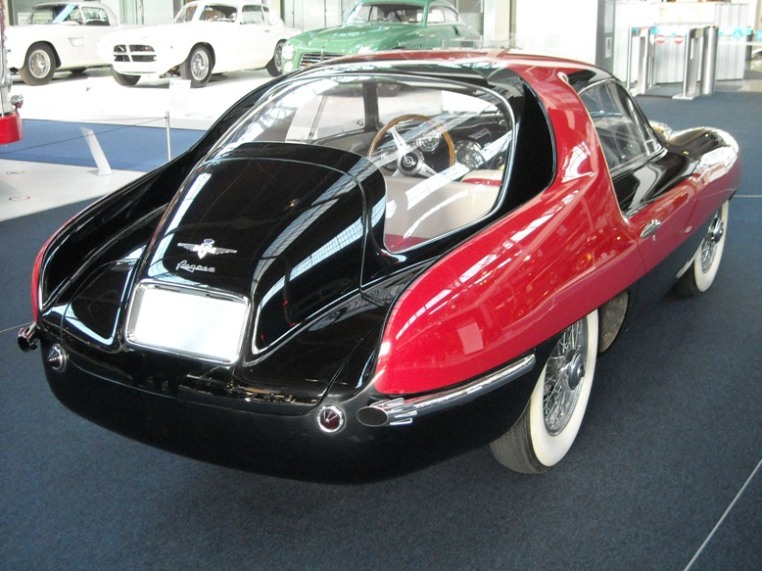 Single model, it was seen exhibited in the salons of Paris in October 1955, in Turin in April 1956 and Barcelona in June 1956. It is kept in the US and has the peculiarity that has wide brake drums with fins, introduced experimentally in 1955. In 2012 it participates at Pebble Beach totally restored 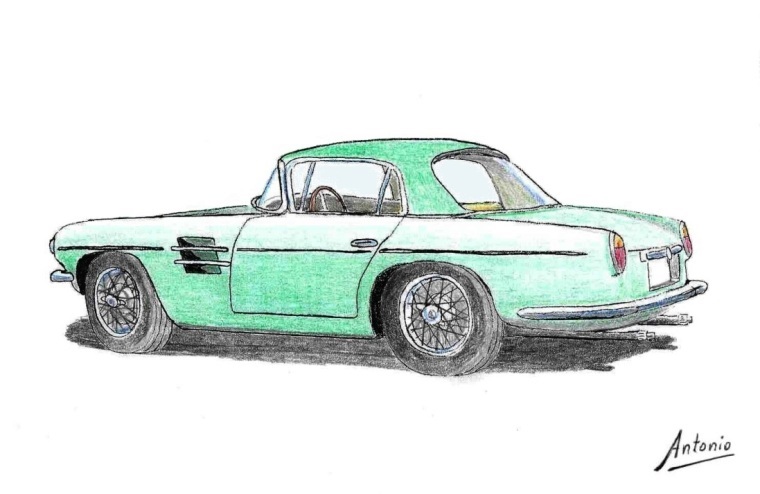 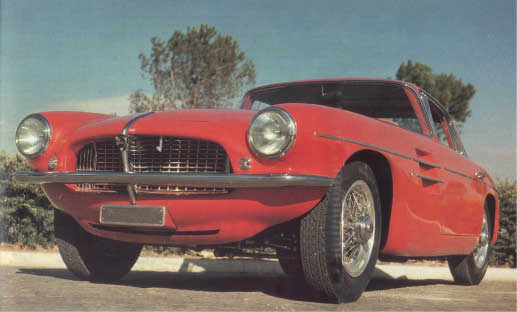 From 1954, the Touring body showed minor changes, mainly in the frontal (central more protected cross, embedded auxiliary lights and intermittent placed above). But it would be the end of the commercial life of the Pegaso Z-102 in 1956, when they presented a more differentiated design. Developed to launch the model Z-103 with Z-104 engine, the Panoramic Touring Berlinetta exhibited a more solid and wide line with a wraparound windshield and a front line easier. 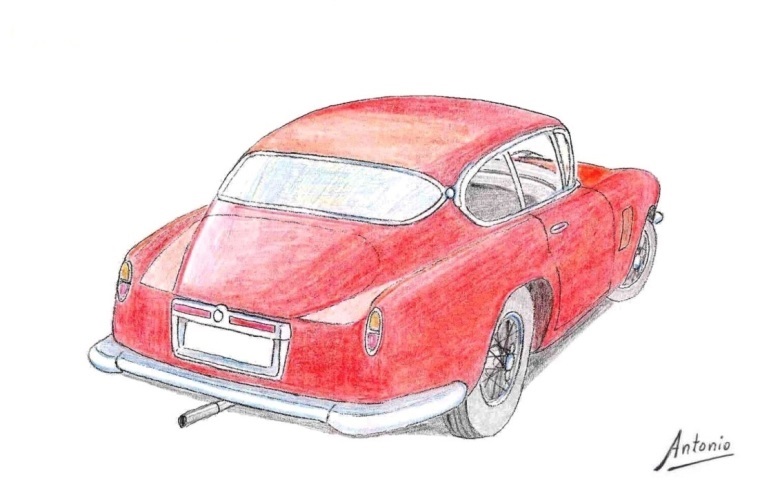 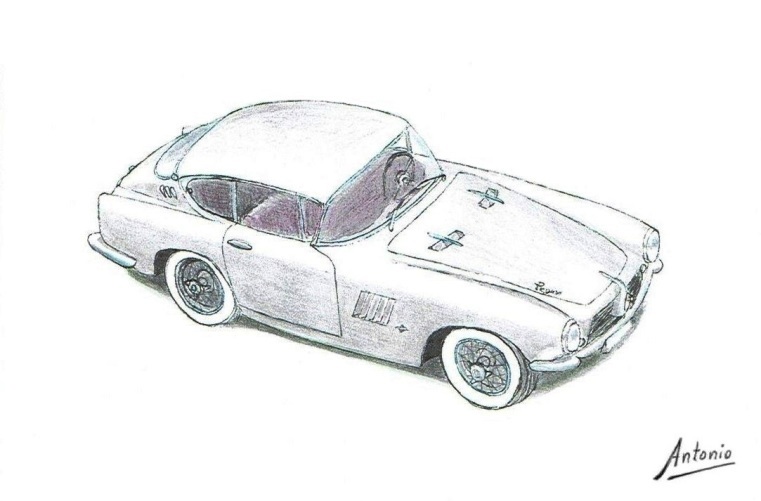 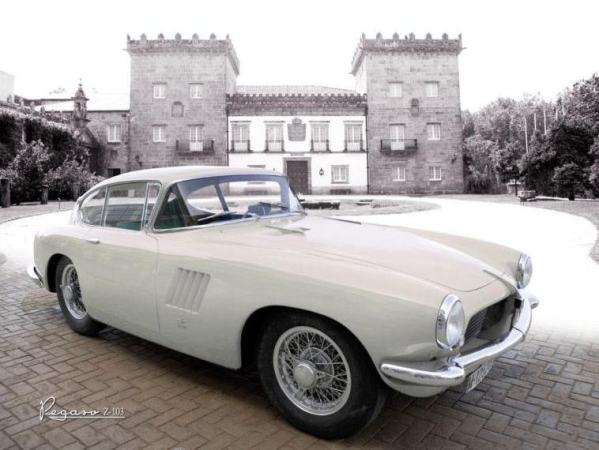 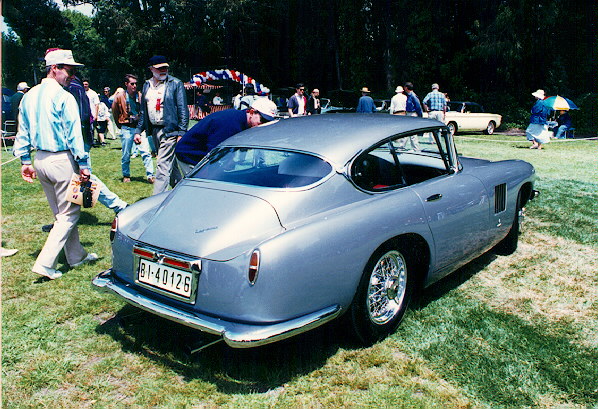 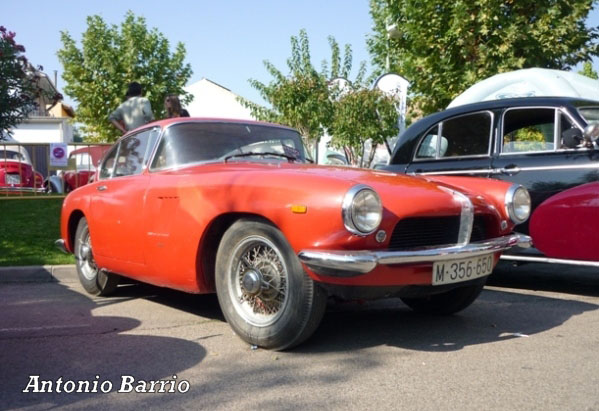