Pegaso chose Monaco Grand Prix for racing debut, held under the formula exceptionally Sport over 2 liters in the June issue of 1952. In this beautiful setting you could find involved two Pegaso Z-102 BE 2, it was lightened berlinetas bodied factory, equipped with 2.8 engine with four carburetors. They were painted in red with hood in yellow and had a ventilation grills and openings for the location of oil plugs and water. The assembly of the car was in such a hurry that there was no time for pre-filming, so we decided to take them by road from the factory in Barcelona to Monaco. JoaquŪn Palacio and a mechanical tested their vehicle while Celso Fernandez did the same with the other, though this would be confident in the GP the pilot Juan Jover. Once the circuit problems quickly emerged: the address was very hard and the brakes did not respond to such intense stresses. Besides the heat inside the berlinettas it was unbearable. Pegasus mechanics made some corrections in the direction of the car, but the problems appeared again in qualifying an oil pipeline broke in two cars. Under such circumstances, the Pegaso team abandoned the race. This race would be won by twelve-cylinder Ferrari 225S. 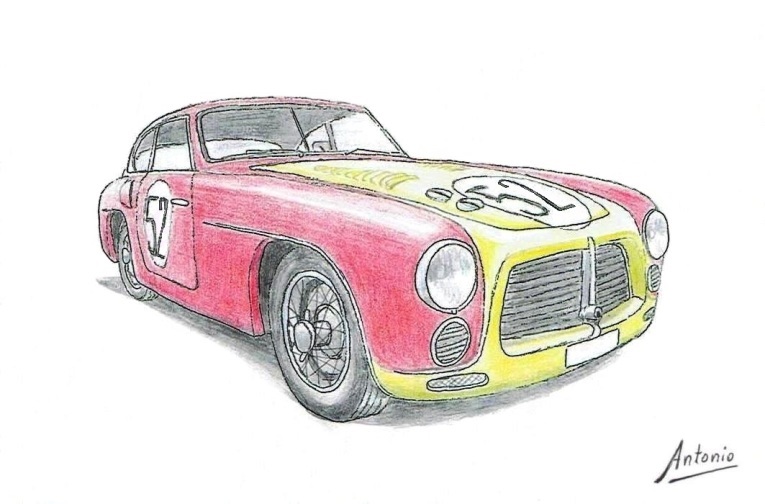 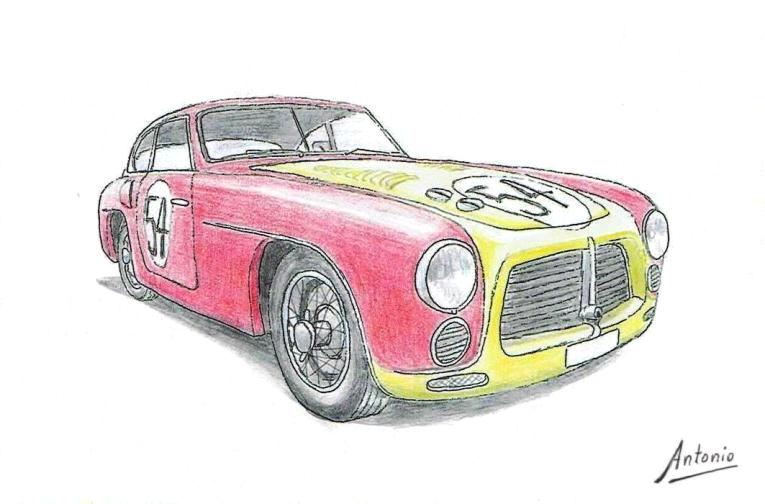 Pegaso's first project conceived from the ground up specifically for racing was the Pegaso Z-102 Rabassada Spider, was equipped with a 2.5 engine compressor. His body had been built in the workshops of Enasa with riveted aluminum sheets. It debuts on the climb to the Rabassada (Barcelona) 1953 conducted by the test pilot plant Joaquin Palacio who, wearing protective glasses (but without helmet), won the race with authority, ahead of a Maserati of Formula 2 driven by Juan Jover (which later would pilot for the official Pegasus team) and a Francisco Godia's single seater car Cisitalia. Teammate Celso Fernandez finished fourth in the lightweight coupe Pegaso (chassis number 1070). A XK120 and Allard conducted by national competition pilots completed. In the following year Julio Rech also got the victory on the climb to the “Cuesta de las Perdices” (Madrid). 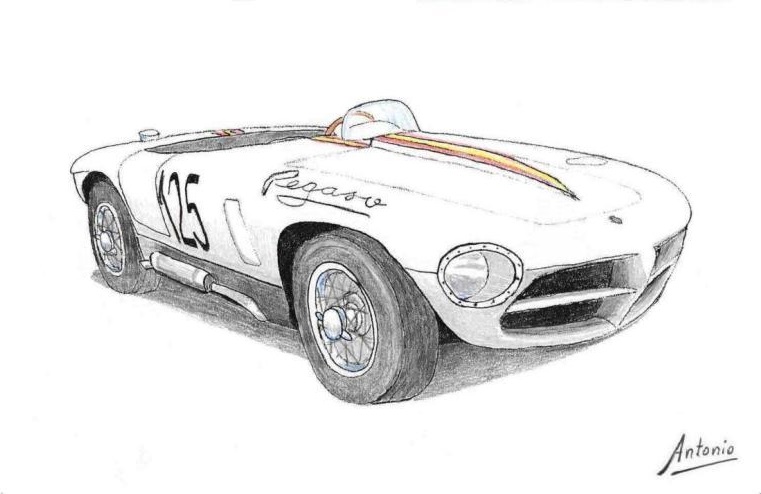 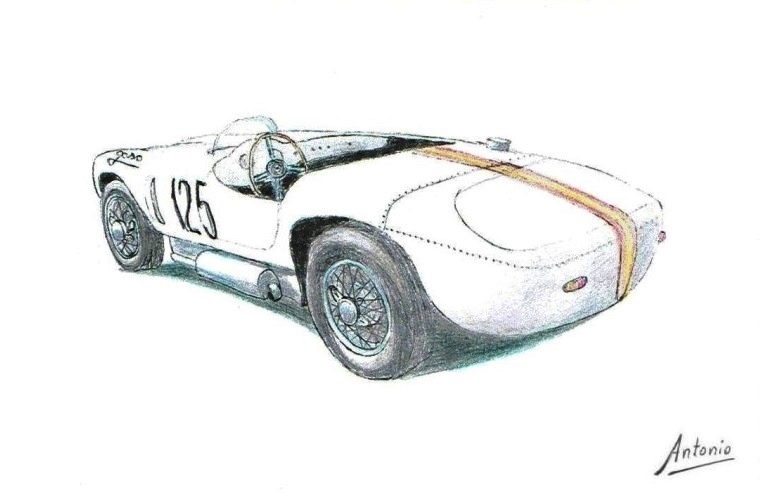 In late 1954 a second Rabassada version was built endowed with fiberglass body for the factory and the supercharged engine with two compressors, he rose Rabassada again in 1955, achieving another record led by Celso FernŠndez. Would compete in some competitions over before exhausting their luck in an accident in Galapagar hill climb near Madrid. It was a total loss and consequently was scrapped by the factory. 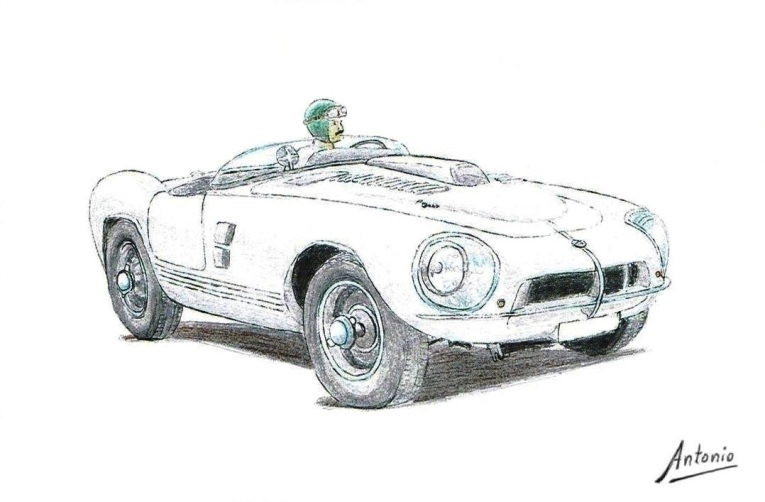 Currently there is a recreation -built in 1994- of that first Spider Rabassada from an original chassis and engine Pegaso.

In 1952, to promote Gran Turismo models was thought to run in the 24 Hours of Le Mans. Touring was entrusted to three cars for the legendary event, and it slashed three berlinetas and chassis made of aluminum three body styles that were the Pegaso Z-102 Spider Touring Competition (STC). Started training, they would make a number of changes on the fly, because of the high speeds reached on the line of "Les Hunnadieres" (more than 230 Km/h), affecting the stability of the car. Few small tracts of body towards the floor in order to create a square section at the bottom of the car and avoid air turbulence applied.

In the second practice session Joaquin Palacio had to pit to check the brake system. Meanwhile Juan Jover, with the other vehicle, ran off spectacularly in a curve bouncing from left to right, causing the pilot fired out causing him fracture in his leg and in the head, which took months to heal. This accident and poor preparation for the test, motivated that WP Ricart announced the decision to withdraw from the race. 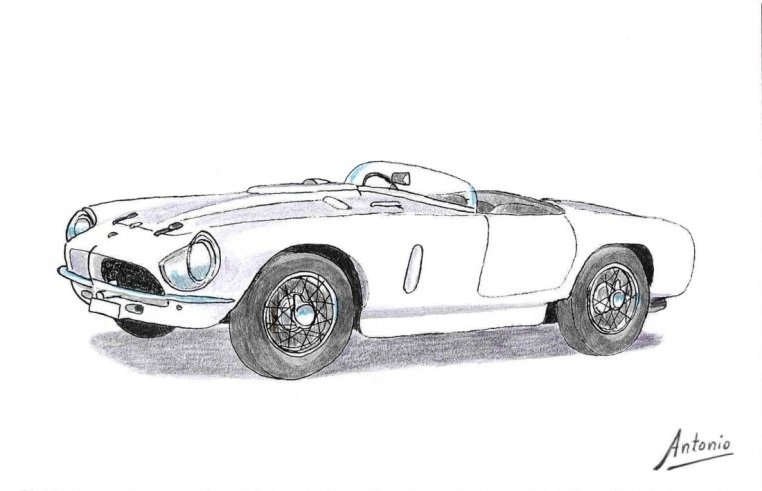 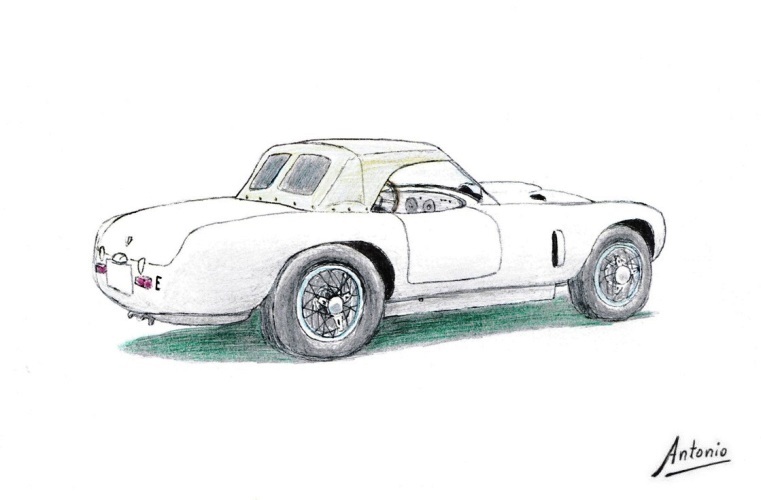 The September 25, 1953, after several tests, it will try to beat the speed record in Belgium with Pegaso BSS/2.5 Bisiluro unfortunately at the decisive moment rife the alarm. The Bisiluro fails, the engine refuses to take turns. Celso FernŠndez did not even get to finish the first attempt. A faulty spark plug electrode is detached piercing the piston. Everything depends, therefore, the spare car, the barqueta Pegaso Z-102 STC/2.8 250 hp compressor bodied by Touring especially for Le Mans. Despite these circumstances the barqueta driven by Celso FernŠndez manages to cover a flying kilometer record average of 243 Km/h overtaking the old record of Jaguar C-type last year. The Pegaso was now officially the fastest car in the world production, although records only lasted a few weeks. Jaguar again next month with its prototype D-type and XK120 modified and improved records at 20 mph (32 Km/h). 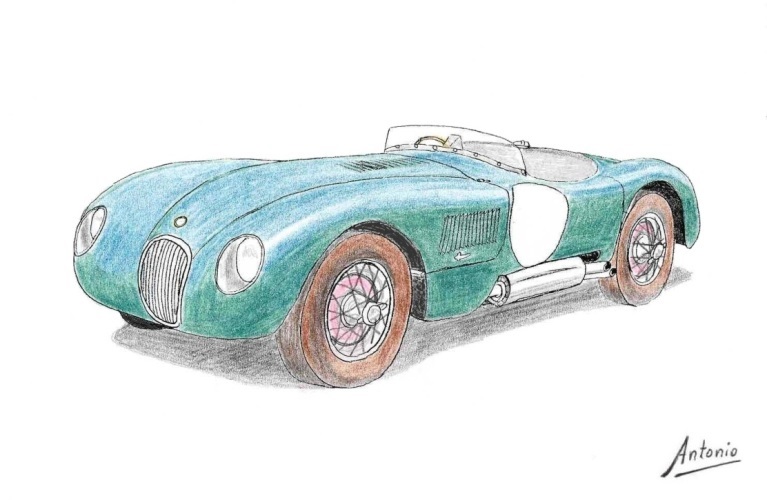 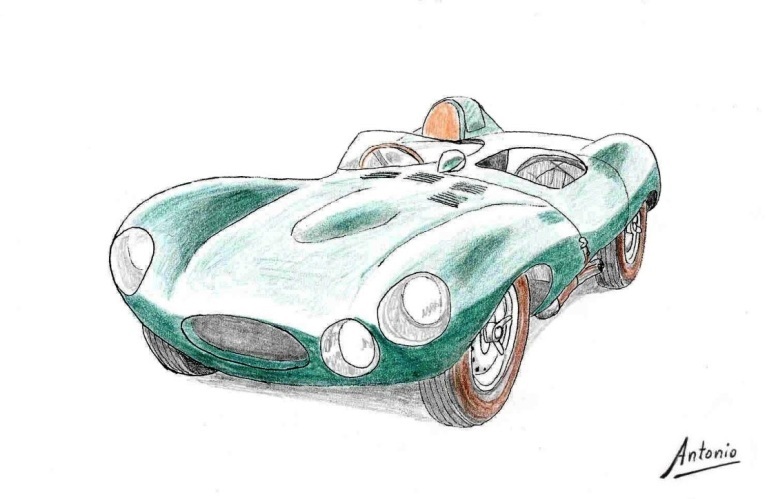 One of the most spectacular races in which participated the Pegaso Z-102 was the Panamericana 1954. The President of the Dominican Republic, Rafael Trujillo, had bought a model that was called "Rosa de Thť" also known as "Cķpula". Wilfredo Ricart asked Touring the construction of two closed body prepared for the harsh days of the Panamericana Race. But there was no time to finish them on time and test. Pegasus finally took part in the latest edition of this race in 1954 with an open version. The course of the test was 3,077 Km and crossed Mexico from north to south, JoaquŪn Palacio was going up positions in the fourth stage with poor visibility due to fog, traveling at over 210 Km/h when he saw surprised by a curve with lots of spectators invading the road because of the previous crash of a participant. Palacio ran off the road the car overturning and burning, but Palacio escaped with minor damage. The winner of that race was the Ferrari 375. After this there was no other international participation.

To impress the international customers searched by Pegasus, the decision to put a couple of cars in the 24 Hours of Le Mans was taken. Surely no Pegaso was as sensational as these asymmetrical versions. The pilot was housed in a narrow cockpit moved on the right flank evoking double fin devices designed by Piero Taruffi to break records straight.

The Bisiluro -in Italian: bitorpedo- be defined as a car two torpedo-shaped bodies joined at the center. In the Pegaso Bisiluro we chose to put the somewhat delayed motor, a unique cockpit to the right and a fuel tank in the central part so that there were no differences in dynamic behavior if it was filled with 200 liters or empty; rear wings also had to increase the pressure on the drive wheels. It was equipped with an auxiliary system of aileron brakes integrated into the body whose deployment produced such an impact that the pilot needed pectoral safety belts to avoid projection against the windshield. The chassis was composed of a reticulated structure of light alloy steel tubes and the bodywork was made of duralumin. The door was cut to allow the game of your elbows steer. Another curious detail is the air intakes behind the rear wheels, connected to the exhaust, had the function of creating a Venturi effect on the exhaust and thus increasing its speed also sweep the combustion chamber. With a 2.5 liter engine and a single compressor it was tested on the track Monthlťry in France, where its leaders realized they needed more time to the development of such a sophisticated vehicle.

Meanwhile, the Bisiluro was used for testing high speed on the open road, which ran alongside the 2.8-liter supercharged barqueta to compare both. They tested it on the road between Tona and Vic near Barcelona, where it reached over 220 Km/h. In the Belgian town of Ostende he failed in attempts to break different records because of a broken spark plug damaged the combustion chamber. They had to change vehicles, knowing that no benefits would be the same and yet the previous speed record was beaten with the tray Pegaso Z-102 STC. 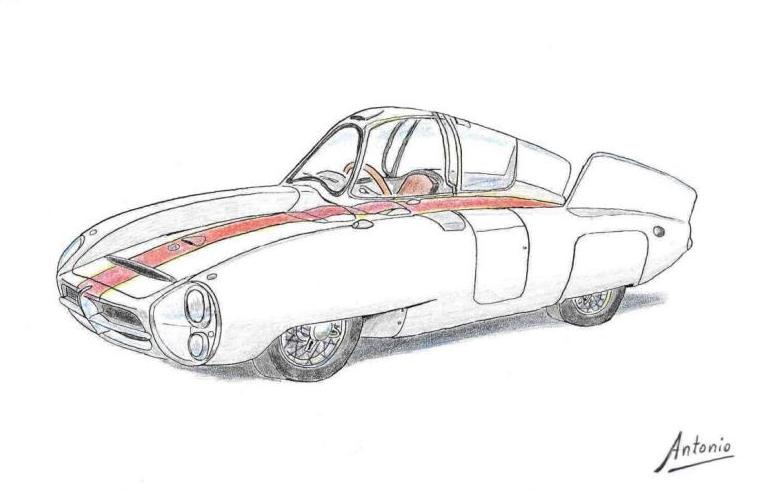 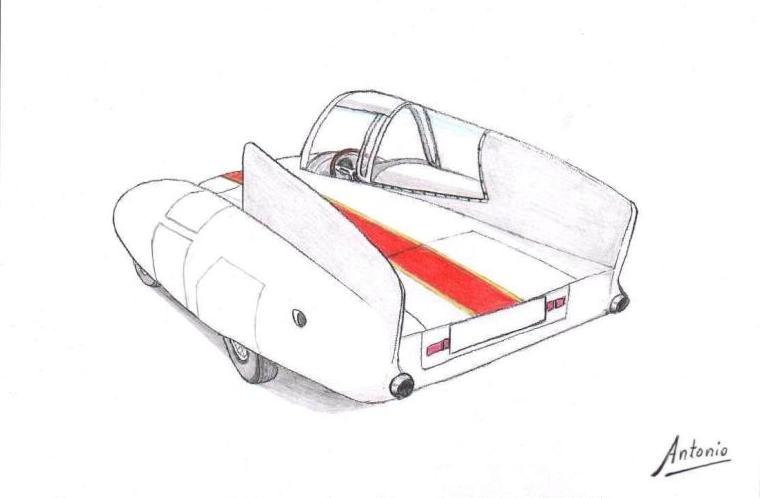 Ricart continued evolution Bisiluro and designed by the end of 1953 the second version, with a much less pronounced dome, clear plastic one-piece for which it was acceded to the cockpit because it lacked door; the hood had a bulge for compressors. This model had the 3.2-liter engine with two compressors yielding 360 HP, enough to exceed 300 Km/h. On October 6th, he made a speed record attempt at Jabbeke (Belgium), reaching "only" 251 Km/h. It finished scrapped as the first version. 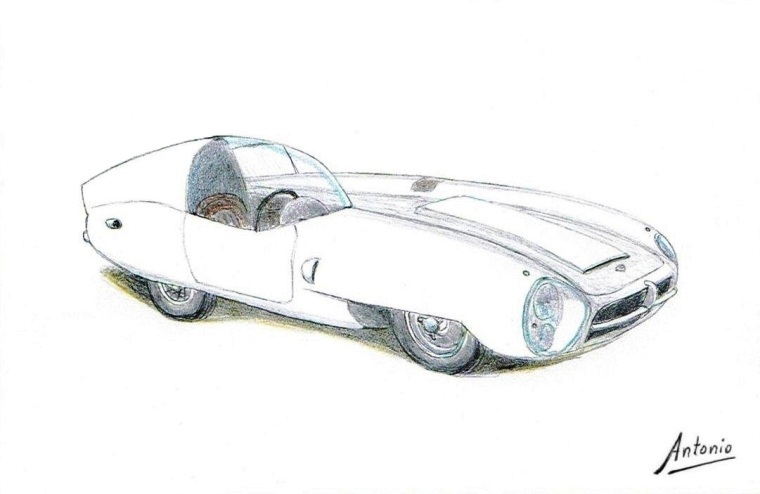 In order to participate in the Panamericana Race 1953, Wilfredo Ricart Touring commissioned the construction of two special closed body prepared for the harsh days by Mexican lands. The "Panamerican" could not be ready in time for the start in the great Mexican test and its fate was far from living up to its promising sports possibilities, limited to participating in various tests of Spanish calendar.

Basically started the design of the barquetas Spider Touring Competition, as the front, hood and headlights are identical. Instead, the rear three-quarter is convex, with a large gate to which forced the two fuel tanks of greater capacity (the filler is in the roof) and the need to have enough space to transport two spare wheels, essential in a race like the Panamericana.

A model is conserved in the restoration period. 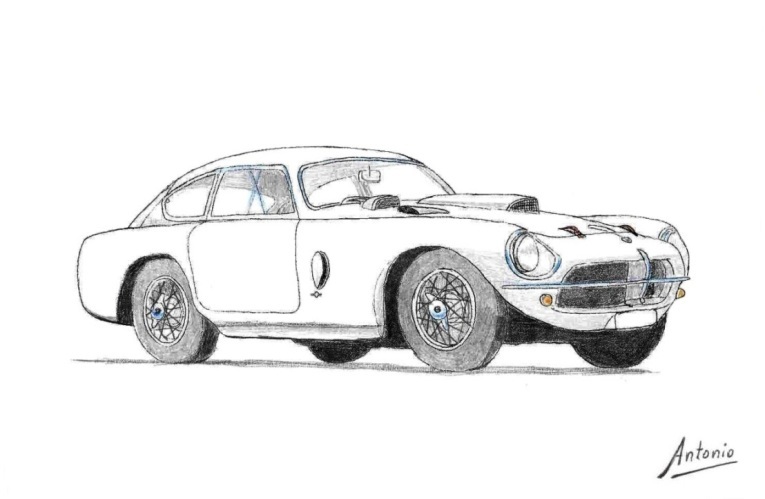 In 1954 was organized the Sport Grand Prix on the street circuit of Pedralbes (Barcelona). To participate in this race, Ricart went to work his team of engineers, entrusting the construction of two cars with five centimeters elongated frame to accommodate the V8 engine of 3.2 liters and two volumetric compressors (360 HP). The front hood is bulky to accommodate the twin carburetors Weber and volumetric compressors.

What stands out most in this body is the airfoil fin which extends behind the driver's head. On the sides should be noted that much lower than in the spider Touring and also carry a fluted.

Neither Celso FernŠndez nor Polo Villaamil finished the race: the first, engine failure and the second brake fatigue. However, Celso FernŠndez was controlled on the main straight at 295 Km/h. 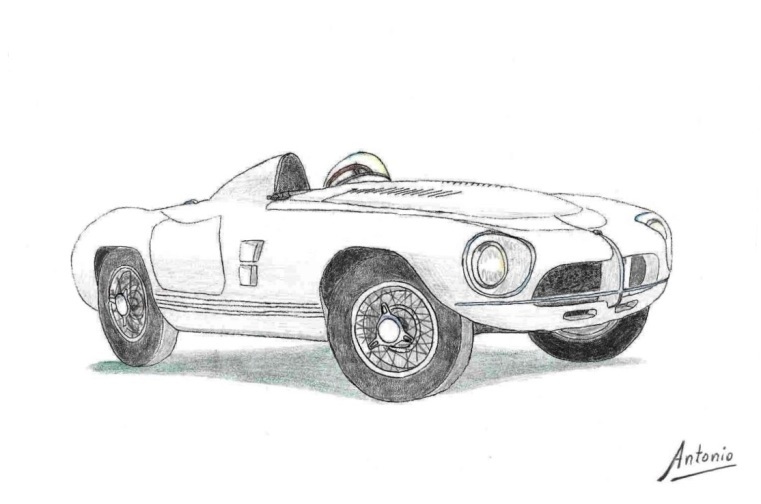 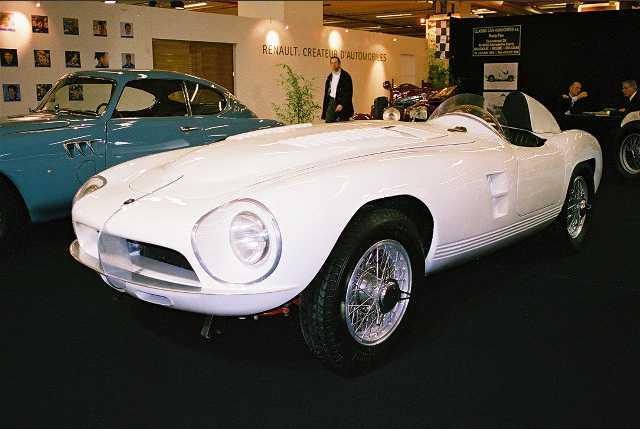 At the end of 1954, the head restraint type "Testa Rossa" was disassembled to ref. 80 and loses its original engine by incorporating another Z-102 engine later.

The ref. 81 is scrapped at the factory and its engine is incorporated into another Pegaso. A frame and body were sold to a customer who fitted it with a Riley engine and modified the cover of the now shorter back suitcase, as well as the wheelhouse openings in the mudguards, forming larger fins to accommodate the 15-inch wheels and their wide tires. 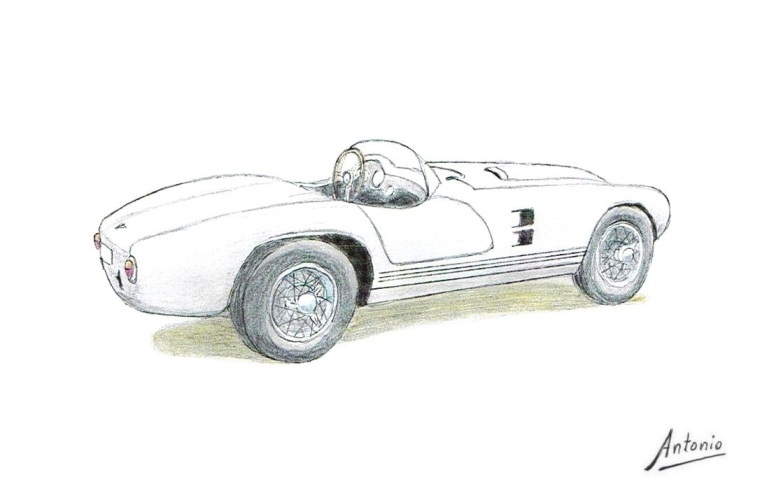 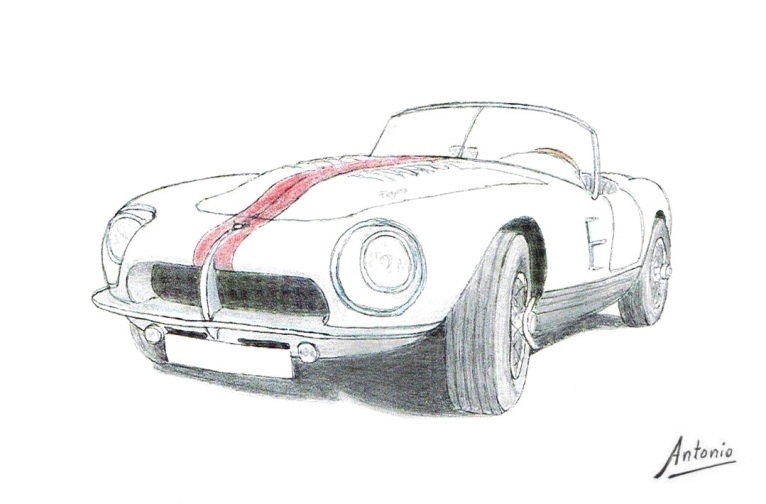 It was built in just two weeks to participate in the II Cup at Montjuic Barcelona street circuit. The most characteristic feature of this car was its lightweight fiberglass body with a mouth similar to the first Rabassada and Touring type hood.
Joaquin Palacio won in the Montjuich Cup, in April 1955, and later participated in various hill climbs driven by Palacio, Villaamil and Gatell. In 1958, its new owner commissioned a body Serra Cabriolet. 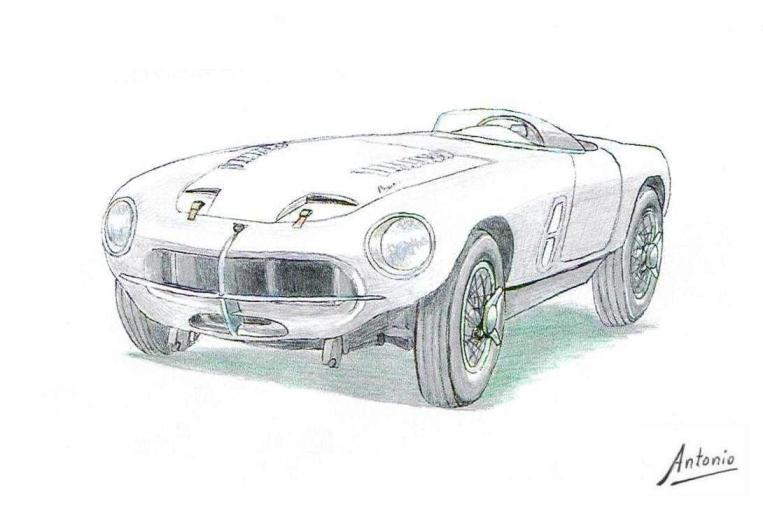